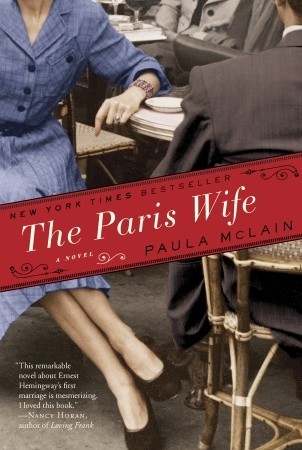 The story of The Paris Wife is familiar to anyone who knows A Moveable Feast, Hemingway’s memoir of “how Paris was in the early days when we were very poor and very happy“. Feast was written some 30 years after Hemingway left Hadley for her friend Pauline Pfeiffer, who would become the second of his four wives. McLain retells Feast from Hadley’s perspective, in the tradition of novels such as Jean Rhys’s Wide Sargasso Sea, giving voice to a pivotal and yet comparatively silent woman from a classic book. The difference between the two is that the action here is largely seen through Hadley’s eyes; the domestic takes precedence and there are more emotions and exposition than Papa would permit.

Hadley Richardson is 28 when she first meets the glamorous young war hero at a party. Wholesome, a little old-fashioned, she’s resigned to a spinsterish existence, living unmarried and unemployed in the upper floor of her sister’s house. Despite the cobwebs she is, as Ernest quickly spots, “a good clear sort“, and so he marries her and whisks her from St Louis to the whirlwind of 1920s Paris, in part because it was comparatively cheap for expatriates just after the First World War. The young Hemingways were soon befriended by Gertrude Stein and Alice B. Toklas, Ezra Pound and Dorothy Shakespear, James Joyce, and Scott and Zelda Fitzgerald. Modernism was taking flight: in February 1922 Sylvia Beach would publish Joyce’s Ulysses, and in December 1922 T.S. Eliot and Pound published The Waste Land. Hemingway absorbed it all.

Even stripped to the core, the story possesses a classically tragic arc, and it’s not hard to see its appeal to a novelist bent on re-fleshing bare bones. Ernest and Hadley – Tatie, as they call each other – begin their expat life in a flush of love. He writes, she cooks, and they drink away the evenings “until we were beautifully blurred and happy to be there together“. The first ripple of disharmony comes when Hadley decides to bring all Ernest’s manuscripts – three years of work, copies included – with her in a valise to a rendezvous in Switzerland. Of course, the case is lost, and the disaster exposes a fault line between the pair that’s only further strained when Hadley discovers she’s pregnant.

McLain atmospherically evokes the garret apartments in which they lived; the notorious trip to Lausanne during which Hadley lost all of Hemingway’s drafts; the outings to the Paris races, skiing in Austria and bullfighting in Pamplona – the trips that would inspire The Sun Also Rises. It was an era of “open” marriages, although the openness was often one-sided, as McLain pointedly shows male artists such as Pound, Ford and, eventually, Hemingway, trying (often successfully) to install their mistresses in the same home as their wives. McLain resists the facile idea that such ménages were a jolly party in the first era of free love: as Hadley gradually becomes aware that Hemingway might be unfaithful, first with Lady Duff Twysden, the inspiration for Brett Ashley, and later, much more seriously, with her friend Pauline, she must decide how “modern” she’s prepared to be.

Hadley is a deeply touching character, dignified even as she loses almost everything she’s loved, and making her goodness both convincing and interesting is an impressive feat. McLain captures Hemingway’s legendary charisma and his fatal tendencies toward bullying and boastfulness. She also manages to evoke his hypnotic, infectious cadences in her own prose without straying into parody: Hadley remembers “The wine and the sunshine and the warm stones under our feet. He wanted everything there was to have, and more than that.” Some might wish McLain had given Hadley a voice more distinct from the highly stylised prose of Feast – but for anyone steeped in that book its idiom is an undeniably effective way of making the story feel good and simple and true.

McLain writes with vivid, memorable touches: the pregnant Hadley, game to the last, sewing baby blankets between bullfights; Hemingway declaring that Pound can’t be “the devil”, because “I’ve met the devil . . . and he doesn’t give a damn about art“. Fitzgerald assures Hadley the first time they meet that he’ll write something new if she will “promise to admire every word extravagantly“; McLain has a similarly good ear for Zelda’s famously imagistic language, having her describe a flapper as “decorative and unfathomable and all made of silver“. The Paris Wife sings with such pitch-perfect renderings of famous voices, grounded in a tale made all the more poignant for our knowledge of how sad all the young men and women will turn out to be, how the bright young things will tarnish and disintegrate. In drafts cut from the first edition of A Moveable Feast, Hemingway explains: “This is about the first part of Paris . . . That Paris you could never put into a single book.” Maybe not – but Paula McLain has come impressively close.

The Paying Guests opens in 1922, in a genteel suburb of London called Champion Hill. The 26-year old Frances and her mother, Mrs Wray, have suffered grievous losses during World War I. All the men of the family are dead–two sons in battle, a feckless, irresponsible father from a stroke, leaving them in debt. The gracious Edwardian life the women had known is finished.

Frances, once a frequenter of political meetings with an interesting female lover, is now forced by circumstances to engage with tiny economies and household dirt, leaving no time for an intellectual or personal life. She resents the “dishonesty” of the house that imprisoned her–“the scuffs and tears she had patched and disguised; the gap where the long-case clock had stood…the dinner gong, bright with polish, that hadn’t been rung in years“–but nevertheless washes the hall floor with vinegar, rakes out the ashes of the stove, struggles to render breast of lamb edible, dusts the “barley twist curves of wonky table legs and the scrolls and lozenges of rough-hewn lawn chairs“–all the useless, pretentious furniture that belonged to the lost family life. Frances would happily have the damn things carted away, but her mother–an excellent study of a distressed gentlewoman–can not let go of the past.

To make ends meet, mother and daughter decide to take in lodgers or, as the contemporary euphemism has it, “paying guests“. Enter the jaunty aspirational clerk Leonard Barber and his short-skirted, lipsticked wife, Lillian, bringing bric-a-brac and gin into the upstanding Wray home. From the moment the colourful, curvaceous Lillian Barber enters the house it’s obvious which way things will go. She slips off her shoes, not wanting to mark the floor so energetically polished by Frances, and her sweet little feet in their fancy stockings leave “small damp prints on the wax“. The very next day she takes an extravagant and semi-public morning bath. Mrs Wray is scandalised by the timing and the cost, but Frances pictures “that round flesh, crimsoning in the heat“. The passionate love affair that ensues between landlady and lodger turns both lives inside out. The sex is blazingly descriptive, rarely found in literary fiction.

Set during the last years that gay marriage was illegal in Britain, The Paying Guests offers a window into a period when marriage between women seemed unthinkable to most and yet tantalisingly possible to a few: Chrissie, the girl Frances left in order to take care of her mother, now shares a flat with Stevie, a new female lover, and supports herself as a typist. Can Frances leave her mother for paid work and a shot at Chrissie and Stevie’s happiness? Can Lillian leave her husband for Francis? This question torments their affair from its first moments, when, just after they’ve made love, Lillian sets down her left hand “to steady herself against Frances’ embrace, and there was the muted tap of her wedding band, a small, chill sound in the darkness.” And it’s central to the rollercoaster plunge the book takes next when the only straight character to whom Frances and Lillian declare their love for each other dies.

Will the lovers’ dream of marriage (or its approximation) end in accusations of murder, trials and hangings? Maintaining uncertainty with a virtuosity that makes a short read of a long novel, The Paying Guests frequently references Anna Karenina, casting Frances and Lillian alternatively as Kitty and Levin, openly skating their way to domestic bliss, and as Anna and Vronsky, doomed to play out a secret passion that can end only in death.

Waters holds a doctorate in English literature, and she brings a cultural historian’s gift for research to her work. Sometimes, it’s easy to fault Waters’s scholarly background for the all-too-realistic pace of the police investigation and courtroom drama that take up the last third of the novel. But the grinding wheels of justice serve to refocus our attention onto Frances and Lillian themselves, resulting in a third act no less gripping than the first. Will the lovers, separated by Lillian’s family and subjected to the uncertainty of a long trial, crack? In The Paying Guests, Waters tilts a mirror towards the decades of gay and lesbian struggle that preceded 2014’s landmark decision to legalise same-sex marriage in England. Still, at the novel’s end, after its dramatic plot resolution, Waters allows us the faintest hope that a changing world filled with social upheaval may have a tiny corner for Frances after all.