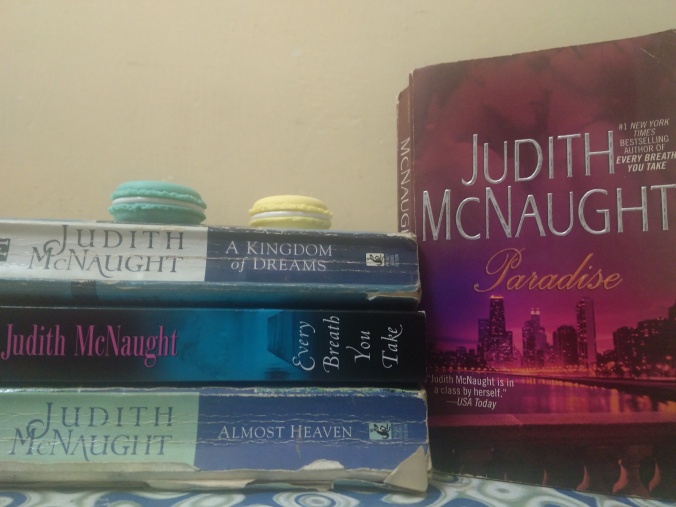 I have a good feeling about 2016. This feeling is based on no facts whatsoever but I’ve been saying it to every person I’ve talked to in  the past two days. Last year, I resolved to become a better reader instead of a faster reader, picking quality over quantity. As a result, I ended up enjoying almost every single book I laid my hands on in 2015. This year, my resolution is a lot simpler. I will read books that are “fun”. Unless I can’t help myself, I will stick to books that are relaxing, funny, exciting, thrilling and much, much more.

The book that is to blame for this decision is Paradise by New York Times bestselling author Judith McNaught. A part of me was hesitant to review an old favourite. What if it doesn’t measure up? I loved the book because I am a die-hard McNaught fan, (McNaught’s Something Wonderful was my first non-Mills & Boon romance) but what if it wasn’t as good as I remembered? I had picked it up as a weekend respite, I still ended up laughing and crying like I had no idea what was going to happen next.

Paradise is the story of a young man and woman in love who are cruelly parted and the people they become eleven years later. You may be tempted to dismiss it as just another book about misunderstandings or millionaires, but it might end up surprising you.

As the heiress to a department store fortune, Meredith Bancroft grew up in a world of wealth and privilege. Her social status, however, couldn’t protect her from being an outcast in the school her father sent her to, so she was always acutely aware of those less fortunate than herself. At eighteen, she was introduced to Matthew Farrell, a young man from the opposite side of the tracks, who’d been invited to an exclusive country club by some of her acquaintances. Realizing that these people only brought him there to poke fun at him, Meredith extends a hand of friendship to him. They instantly hit it off, and later, when he takes her home, they share an unforgettable night of passion. When Meredith discovers that she’s pregnant a couple of months later, she fears what her strict, conservative father will do when he finds out. She seeks Matt out, asking for a marriage in name only to appease her father. Having never forgotten Meredith, Matt is more than willing to step up to the plate and be both a husband and father if she’ll have him, but he’s already signed a contract to work in the Venezuelan oil fields and will be leaving in a week. After a quick wedding, they spend the rest of their remaining time trying to get to know one another as best they can before he has to leave, but it isn’t well enough to overcome her father’s machinations once they’ve parted.

Eleven long years later, Matt has finally accomplished his life’s ambition of becoming a corporate raider. He’s known the world over for his business acumen, as well as his highly publicized love affairs. He poured himself into his work in an attempt to forget Meredith, and although he’s tried to convince himself that he no longer feels anything for her, she’s never completely left his mind. Now he’s back in her hometown of Chicago, finalizing the takeover of yet another company. When Matt sees Meredith again, she stirs feelings in him he thought he’d put to rest, but because of the past and unaware of her father’s vendetta against him, he believes she’s nothing but a snobbish socialite. He decides to get revenge on both her and her father by taking over the department store that means so much to both of them. But when he finally discovers the truth about what happened all those years ago, it places him on a collision course with destiny. Now certain that Meredith still has feelings for him too, he sets about attempting a takeover of a different kind – one that he hopes will win her heart.

As I read Paradise this time through, I thought a lot about what makes it so special. One thing I truly appreciated is that McNaught doesn’t skimp on the reader. This book is over seven hundred pages long, and not one page is wasted. We are allowed to see Meredith as an awkward preteen, and we fully experience Matt and Meredith’s early romance. Frankly, I doubt a new romance author today could get such a long book published. As it is we become thoroughly attached to Matt and Meredith before their tragic parting, which makes their separation much more poignant.

While most Big Misunderstandings make me grit my teeth in annoyance, Matt and Meredith’s Big Mis is a fundamental strength of the book. So often a misunderstanding is rooted in something truly idiotic, like the hero catching the heroine hugging another man, whom any idiot (except him) can tell is her brother. But the Big Mis here is perpetrated, believably, by Meredith’s controlling father. Matt and Meredith are in love, but they are both naïve, and both fail to understand just how far her father is willing to go to separate them. The scene in which Meredith miscarries and calls and calls for Matt is utterly heartbreaking. It always reminds me of a similar scene in Gone With the Wind, which, come to think of it, also occurs after a miscarriage. Scarlett calls for Rhett, and nobody hears her; Rhett is in another room wishing and wishing that she would call his name. Every time I read it I want to insert myself in the book somehow and fix things, which is just how I feel with Matt and Meredith. The payoff comes in the incredibly touching scene when Meredith finds out about her father’s deception and tells Matt the truth. I cried like a baby even though it was my seventh reading.

But perhaps the real reason this book works so well is that the characters are lovable and real. Yes, they are both stunning, and yes, they are both super rich. But both are the kind of people you can root for. They both have to overcome prejudice; Matt has his impoverished past, and Meredith has a controlling father with an unfair gender bias. When Meredith and Matt are together, they truly enjoy each other’s company, even when they are in the midst of their misconceptions about each other. They are flanked by a cast of secondary characters who really add to the story, and their respective business scenes are always interesting.

I absolutely adore almost all of McNaught’s books, but Paradise is still more special than most others. This is a book that might make you cry buckets, but it will also make you believe in the power of love in a non-cloying way. Matt and Meredith endure heartbreaking loss and eventually find joy in each other. Rereading it reminded me of all the things I love about romance. It is truly one of the best the genre has to offer.

There was an error retrieving images from Instagram. An attempt will be remade in a few minutes.